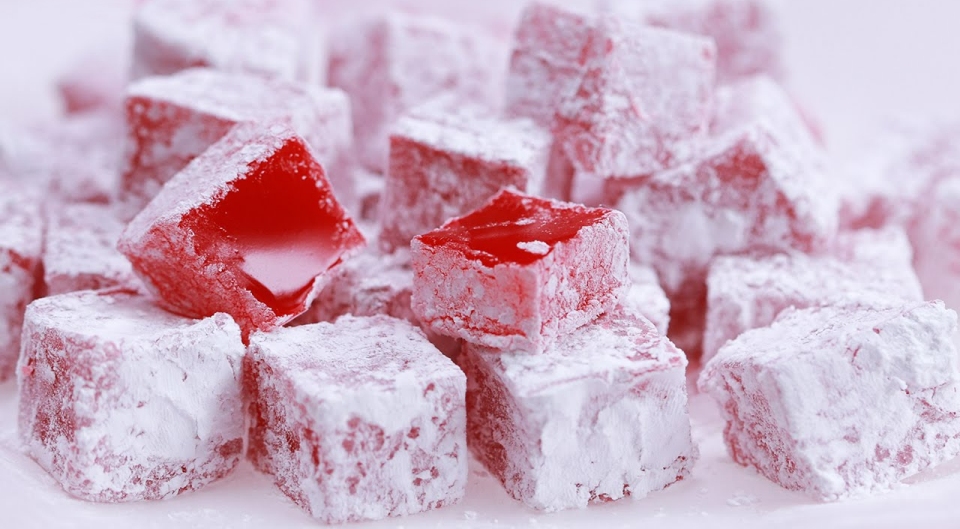 The story of the creation of Turkish Delight (lokum) begins in the late 1700s, when Ali Muhiddin Haci Bekir, confectioner to the imperial courrt in Istanbul, listens to the sultan rant:

"Hard candy! I'm tired of hard candy!" the sultan growled as he cracked a tooth on yet another sourball. "I demand soft candy!" Ali Muhiddin Haci Bekir had come to the imperial capital of Istanbul from the Anatolian mountain town of Kastamonu in the late 1700s to hear his emperor's plea. His mountain-man blood rose! His face turned grim with conviction! He set his jaw with determination! He was going to take bold and decisive action!

He marched into his confectioner's kitchen and thought up a recipe: he mixed water, sugar, corn starch, cream of tartar and rosewater, cooked it up, poured the mixture into a flat pan slicked with almond oil, and let it cool. Then he sprinkled it with powdered sugar, cut it into bite-sized chunks and...his hand trembling, his eyes bright with anticipation, his mind fraught with trepidation, his lips quivering to receive the morsel...he bit!

What? No crack of candy crunched by his mighty alpine jaws? No shower of sugary splinters scattering through his oral cavity? Why, this new confection was soft and easy to chew, a pleasure, a treat for both palate and teeth! It was... it was...a comfortable morsel!

Rahat lokum ("comfortable morsel"), nowadays called simply lokum, or Turkish Delight, was an instant hit, especially at the palace. Ali Muhiddin became a celebrity overnight as palace bigwhigs (or, more usually, their lackeys and gofers) traipsed down the hill from Topkapi Palace to Eminönü on the Golden Horn to buy boxes of Comfortable Morsels to thrill the jaded palates of Ottoman potentates.

You can still buy lokum at Ali Muhiddin's shop in Eminönü today, almost 250 years since the intrepid confectioner saved his sultan from sourballs. It's on Hamidiye Caddesi at the corner of Seyhülislam Hayri Efendi Caddesi, two blocks east of the Yeni Cami (New Mosque).

Over the centuries Ali Muhiddin's descendants (the shop is still owned by the family) fiddled with the recipe, adding good things like walnuts, pistachios, oranges, almonds, clotted cream, and of course chocolate. (The plain rosewater original is still a favorite, however.)

Lokum (Turkish Delight) is now made and sold in thousands of shops throughout Turkey, and enjoyed with Turkish tea or coffee, or just by itself. A favorite place to buy it is Afyon, where the rich local clotted cream is used to make kaymakli lokum.

You can make your own Turkish Delight at home. Here's a recipe. When you visit a shop, don't be afraid to ask for a free sample: say Deneyelim! (deh-neh-yeh-LEEM, "Let's try some!") (For more Turkish words and phrases, see my Turkish Language Guide.)

During your trip to Turkey you can easily buy excellent Turkish Delight (lokum), but after you return home you'll want more. Make it yourself! Here's a recipe to make several dozen squares:

In a saucepan, mix 4-1/2 cups water, 5 cups granulated sugar and 1 tsp lemon juice. Bring the mixture to a boil, then simmer for 10 minutes, dissolving the sugar to make syrup.

In a bowl, mix 1 cup water and 1 cup cornstarch, then blend in the cream of tartar.

Gradually blend the cornstarch mixture into the simmering syrup while vigorously stirring with a wire whisk. Stir frequently while cooking for 1-1/2 to two hours, until the mixture forms a soft ball with an internal temperature of about 235°F (113°C).

Test the mixture by dropping a small amount into ice water. It should form a ball. When picked out of the ice water and held between two fingers, it should easily flatten.

Stop cooking the mixture, and mix the nuts in well. Hazelnuts or walnuts should be broken into smaller pieces.

Pour the mixture into an eight-inch-square flat cake pan (greased) and spread it evenly throughout the pan. Sprinkle two tablespoons of cornstarch on top of the mixture and let stand for at least three hours, or preferably overnight.

Mix 1/4 cup confectioners (powdered) sugar and 3/4 cup cornstarch. Grease a knife with butter and cut the Turkish Delight into squares. Lift the squares out of the pan, sprinkle with the cornstarch and sugar mixture, and place on a rack to "cure" for 12 hours. Sprinkle again with the sugar and cornstarch, and serve, or keep in a box. Do not refrigerate.